I am not kidding.

As my family knows, I am darned picky about tuna. Years ago, there was a brand usually sold to restaurants that I was able to get over the internet.

Mothers routinely would call or corner me and ask what I did to make tuna salad that their kids loved and mentioned to their mothers. "Easy," I said. "Just use albacore and real mayonnaise."

You would not believe how many faces of disgust I saw at the mention of real mayo. Our country is so messed up.

However, I digress. My beloved tuna was discontinued, at least for public purchase. Sadness ensued. Accompanied by a quest to replace it.

I have been able to do so to varying degrees, finally settling for a kind sold at the Central Market. For $6 per can.

It was worth it. Just believe me. Not equal to my restaurant tuna but close enough. Then, of course, The Central Market discontinued carrying it in favor of their own brand which, you should excuse me, is something my cat would enjoy but not something I care to eat myself.

Yes, HEB, just take it. Your tuna is not all that.

Back to the internet I went. Where I found Lazio tuna ... which I completely bought myself. (Hark! Can you hear the angels singing?) Oh. my. goodness.

I bought the oil-pack ... just to be an anti-politically-correct-American. As I said, the angels sang.

A canned filet with none of that weird stuff in the bottom of the can. A flavor where you can tell it actually came from a tuna ... while still being distinctively canned tuna. Delicately salted but enough that you can tell there is salt. And packed in oil. Like when I was a kid! Although that wasn't olive oil when I was a kid. I think it was ... soybean oil? However, I digress again. Just believe me that this is a glorious products.

Go get yourself a sample.
Posted by Julie D. at 1:57 PM No comments:

This recipe, originally Bridge Creek Fresh Ginger Muffins, is from The Breakfast Book by Marion Cunningham. I served these for a book club meeting and was greeted with cries of delight mingled with demands for the recipe. Indeed, one friend's mother loved them so that she is being applied to daily for the recipe, where is that recipe!

Now that surely warms the cockles of any baker's heart.

Rather than type it in, which I have been trying to find time to do since that meeting three weeks ago, I found it at Williams Sonoma where it looks as if they slightly adapted it for one of their cookbooks, such as more than doubling the amount of ginger called for. I changed it back to Cunningham's amount. You can find a wonderful photo of the muffins here.

Update: I now have had a chance to compare Cunningham's original recipe with that from Williams-Sonoma and they tinkered with more than the ginger amount. I have restored the recipe to its original state.

These are fresh tasting and I agree with Cunningham who comments in the recipe that you can hardly ever have too much fresh ginger. My two-ounce measure went over the 1/4 cup measure mentioned below so I didn't worry.

3/4 cup plus 3 tablespoons sugar [divided use]

2 tablespoons lemon zest (from 2 lemons), with some white pith

Cut the unpeeled ginger into large chunks. If you have a food processor, process the ginger until it is in tiny pieces; or hand chop into fine pieces. (You should have about 1/4 cup. It is better to have too much ginger than too little.)

Put the ginger and 1/4 cup sugar in a small skillet or pan and cook over medium heat until the sugar has melted and the mixture is hot. Don't walk away from the pan -- this cooking takes only a couple of minutes. Remove from the stove and let the ginger mixture cool [which also happens fairly quickly].

Put the butter in a mixing bowl and beat a second or two, add the remaining 1/2 cup sugar, and beat until smooth.

Add the eggs and beat well.

Add the buttermilk and mix until blended.

Add the flour, salt and baking soda. Beat until smooth.

Spoon the batter into the prepared muffin tins so that each cup is three-quarters full. Bake 15-20 minutes [until a toothpick inserted into the center of a muffin comes out clean]. Serve warm. [I served them a day old and they were delicious.]
Posted by Julie D. at 9:08 AM No comments:

Email ThisBlogThis!Share to TwitterShare to FacebookShare to Pinterest
Labels: Breads 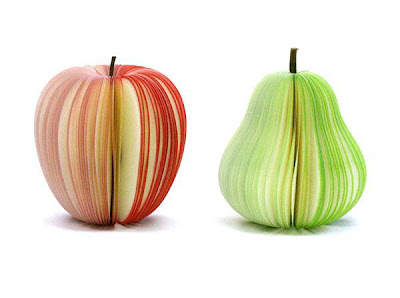 Believe it or not, these are each 150 sheets of note paper, though the stem is made with a real twig. They are detailed right down to the seeds, as you can see below. As you may well imagine they are very expensive. (Via The Food Section)