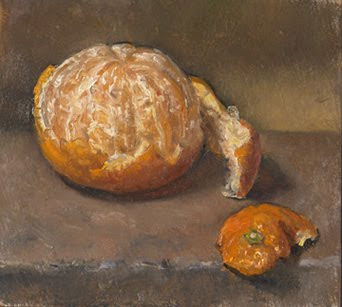 Peeled Clementine
by the extremely talented Duane Keiser
Posted by Julie D. at 8:07 AM No comments:

In which we travel the wide world seeking rice and also find adventure.

More lagniappe at Forgotten Classics.
Posted by Julie D. at 8:09 AM No comments:

The Food of a Younger Land

I reviewed the book a while back and now offer a bit of lagniappe from it over at Forgotten Classics.
Posted by Julie D. at 12:02 PM No comments:

Do People Still Cook? Michael Pollan's Answer Raises Hackles But I Think He is Right.

The movie Julie & Julia, due out soon ... or possibly out now for all I know ... has raised a lot of food chatter and contemplation of the state of cooking in American kitchens.

Perhaps none has raised hackles more, and for me more unexpectedly, than Michael Pollan's article for The New York Times, Out of the Kitchen, Onto the Couch. It is a long article but well worth it as Pollan considers why we have gone from cooking food to watching others cook it on The Food Network.

But here’s what I don’t get: How is it that we are so eager to watch other people browning beef cubes on screen but so much less eager to brown them ourselves? For the rise of Julia Child as a figure of cultural consequence — along with Alice Waters and Mario Batali and Martha Stewart and Emeril Lagasse and whoever is crowned the next Food Network star — has, paradoxically, coincided with the rise of fast food, home-meal replacements and the decline and fall of everyday home cooking.

That decline has several causes: women working outside the home; food companies persuading Americans to let them do the cooking; and advances in technology that made it easier for them to do so. Cooking is no longer obligatory, and for many people, women especially, that has been a blessing. But perhaps a mixed blessing, to judge by the culture’s continuing, if not deepening, fascination with the subject. It has been easier for us to give up cooking than it has been to give up talking about it — and watching it.

As an aside to the main point of this post, I also was struck by Pollan's point that we now have routine access to luxury foods that we wouldn't go to the trouble to make often for ourselves if there were no other choice. I'm not talking about truffles and foie gras here. I'm talking about french fries and fried chicken. I don't know why this struck me with such force here. Possibly because of the forceful advice of a someone that Pollan interviews who says:

“Easy. You want Americans to eat less? I have the diet for you. It’s short, and it’s simple. Here’s my diet plan: Cook it yourself. That’s it. Eat anything you want — just as long as you’re willing to cook it yourself.”

I would certainly have fewer french fries, less ice cream, and no soda. However, I digress.

Pollan is usually the darling of the food writing/reading/cooking world for his repeated calls to sanity in eating and food production. Now, however, he has been accused of no less than insulting women as a whole. Barbara at Tigers & Strawberries covers this as well as various other problems and reactions to the article. There are some good links there.

I didn't pick up on the anti-woman theme, however, I must also admit I had a different thought in mind when reading the article.

I read it right after spending the weekend putting on a marriage enrichment retreat. Hence, our down time often consisted of hanging out with the other couples working on the retreat.

It was during one of these times when I mentioned cooking to a guy who I like and respect a great deal. His response dumbfounded me. As best I can remember, he said,

Cooking. I don't know. Making a meal just takes time we could use for something else.

I got the distinct impression that an hour was something valuable, not worth squandering on dinner prep. (Ironically, he was one of the couple in charge of food for the weekend.)

I didn't know what to say. It was as if he was stringing together words that I knew individually but that didn't make sense in the order he pronounced them.

I simply had never come across that particular attitude before.

I finally said, "Well, in my family food was close to religion. Heck, it was our religion. I figure we've all got to eat so we might as well eat something worthwhile."

I think I might have dumbfounded him in return.

There was a silence while we both smiled at each other.

Finally, I said, "It's a very French attitude." My husband laughed and said, "Yes, it is very French, the way her family feels about food."

We moved on to other things but that surprised me so much that it kept surfacing. I wondered if his wife never, ever cooked. How does one do that? Restaurants, take-out, and frozen food? The fact that I was so mystified at the mechanics of how someone would exist that way goes to show that the concept simply never occurred to me.

At any rate, that is all a long way of saying that, whatever else one ascribes to Pollan's article, he was absolutely right that many people, in fact I would venture to say most people, just don't cook any more. I have seen food people refuting this hotly but from my other experiences in regular America, encounters with my friend aside, this is what I have seen to varying degrees.

Dr. Boli helps us see the strength of their argument!